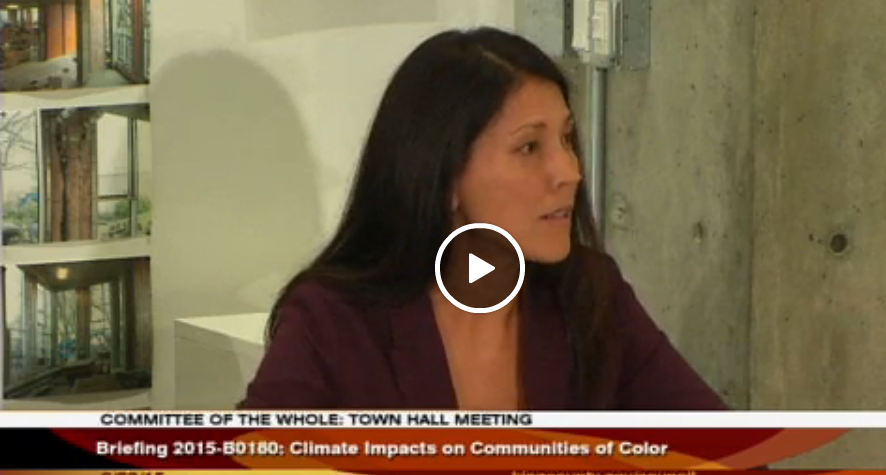 On Monday, September 28, King County held an important town hall meeting concerning climate change and its local and national effects. In a community–wide discussion about the risks of carbon emissions and the rewards of climate action

As the coordinator for Communities of Color for Climate Justice, a coalition of over 50 multiracial organizations and leaders advocating for equity in Washington State climate policy, Aiko Schaefer highlighted climate justice as a crucial centerpiece of the climate issue.

“While I agree climate change affects us all,” said Schaefer, “it disproportionately and unjustly impacts people of color and people with lower incomes, both globally and locally.”

What Schaefer expressed was not merely sentiment, but a well–documented fact. Research from the World Bank in 2013 concluded that poverty reduction and climate change are inextricably linked. And according to a report released by the UN in 2014, “People who are socially, economically, culturally, politically, institutionally or otherwise marginalized are especially vulnerable to climate change.”

The research is out there and governments have begun to take notice. In 2014, the Obama Administration unveiled the third U.S. National Climate Assessment (NCA), finding unequivocally that low–income communities and communities of color are already suffering the impacts of increased vulnerability due to the stresses of extreme weather events, heat waves, poor air quality, and proximity to toxic pollutants.

Schaefer outlined several ways climate change is already having a disproportionate impact in Washington. For instance, this summer’s drought hurt crop yields, making it harder for agricultural workers to make a living. Higher water temperatures in the Puget Sound left subsistence fisherman with less to eat. And wildfires engulfed the homes of people without smart phones or televisions to hear the warnings.

“These stories are about climate change,” Schaefer said, “but they are also about justice. Is it fair that because you have less money or you’re a person of color, that your chance to a healthy, thriving, and secure life and future is less possible? I think we can agree that it is not.”

According to Schaefer, this is “one of the reasons why public opinion polling consistently shows that people of color overwhelmingly support climate action.” And while these salient risks pose an increased threat to institutionally marginalized Americans, they also represent an opportunity — the chance to “lift people out of poverty, create stable jobs in a resilient economy, protect our communities from extreme weather and invest in clean air for our families.”

This is the reason Communities of Color for Climate Justice has formed a diverse coalition with the common purpose of putting equity at the center of climate change policy.

In order to make this happen, Schaefer emphasized, we must all come together to advocate for equitable climate policy. That’s why we’ve partnered with the Alliance for Jobs and Clean Energy, a broad coalition of businesses, unions, communities of color, environmental, health, and faith groups. And as we move forward together, it is essential that people of color have key roles in the policy design and implementation process.

“Historically, communities of color have not been engaged by mainstream environmentalists and policy makers on environmental issues. It’s changing, because it has to. In King County, 37% of our population is people of color, and in 20 years, those individuals will be the majority. If we are to be effective at addressing climate change, we must do more to put these communities in the center of this conversation.”

Though Schaefer commended King County for including equity and social justice as a focus in its Strategic Climate Action Plan, she called for more rigorous standards providing net environmental and social benefits for disadvantaged communities.

“At a minimum,” said Schaefer, “people should not be made poorer by our actions. But rather we should make clean, living jobs, and pathways to the green workforce, enable people of color and people of lower incomes to live where they work, and provide resources so that those with less means can also reduce their carbon footprint and build stronger, thriving communities.”

Climate change is more than just a moral issue and a public health issue, it’s a human rights issue and a civil rights issue — “an issue of justice as much as it is about the environment. It is about people, our communities, our everyday concerns about our jobs, our pocketbooks, the food we eat, the health and safety of our children, and the future that allows all of us to play a role in the new energy economy.”

Aiko Schaefer is a coordinator for Communities of Color for Climate Justice and a 2015 El Centro Legacy Award Recipient for her work building community through multiracial unity and striving to eliminate poverty, racism, and social inequity.