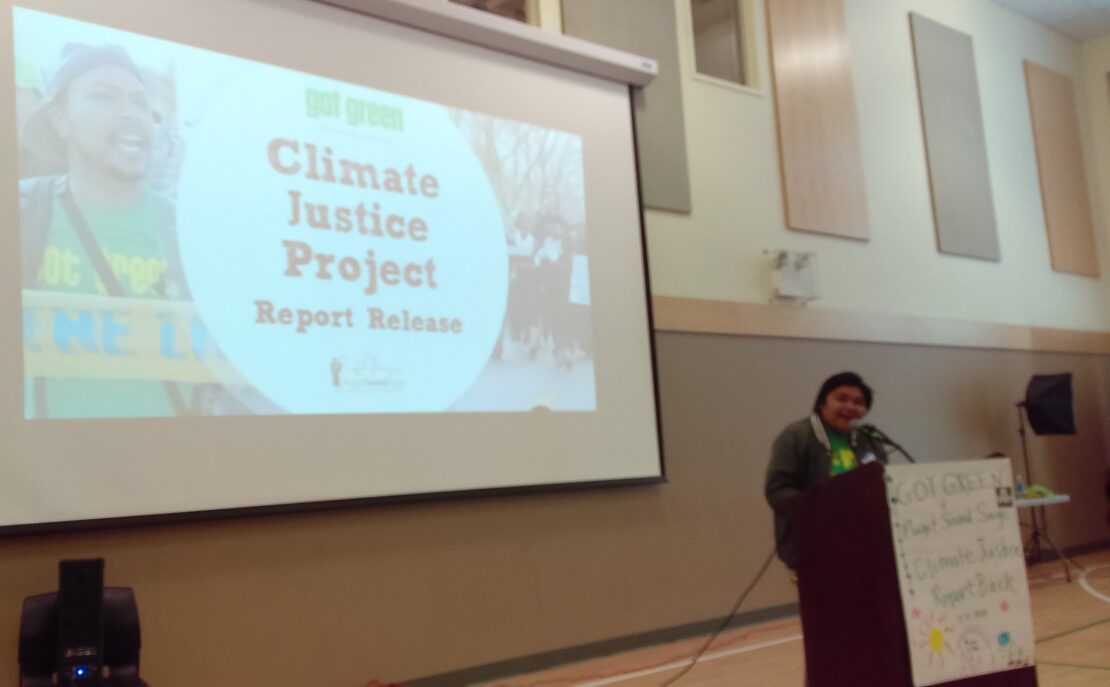 Our People, Our Planet, Our Power, a community-based participatory research project by Got Green and Puget Sound Sage, reports how frontline communities are less likely to have the resources they need to adapt to climate change.

Local air pollution, much of it from burning carbon, disproportionately burden communities of color in Washington. These communities already suffer in terms of their health and wealth, and local pollution creates and reinforces inequities. Unfortunately, communities of color, people with lower incomes and indigenous people also suffer unequal burdens from the effects of carbon pollution and other greenhouse gases; climate change.

Why are some communities, which we call frontline communities, more affected than others? Individuals, families, and communities are either vulnerable to or resilient against the threats faced from climate change based on a number of different factors. These factors include social connections (or social isolation), economic stability, quality of housing, access to transportation, and more. Combined, these factors combine to create the adaptive capacity of a community to any threat or emergency.

Community roundtables conducted for a 2016 report produced by Got Green and Puget Sound Sage titled Our People, Our Planet, Our Power, discussed Hurricane Katrina. Participants at those roundtables “identified that the poorest neighborhoods lacked the resources to evacuate (not having cars or access to adequate public transportation), nor was there support from the broader government to rebuild their communities.”

Climate change is often referred to as a threat multiplier (or amplifier) because it increases the frequency and/or intensity of existing threats such as flooding and extreme heat events. Through both data and anecdotal evidence, folks in Washington are talking more and more about how things like the weather have changed or become more extreme since their childhoods. According to Our People, Our Planet, Our Power, “we have already witnessed the worst heat waves, droughts, and wildfires in Eastern Washington of our lifetimes.”

The idea of adaptive capacity to deal with amplified threats is supported by many of the findings of the report. For example, “access to healthy, affordable food is a pre-existing vulnerability in our communities.” Other issues impacting most neighborhoods included lack of public transportation, pests and insects, exposure to mold, and exposure to toxic chemicals. These overlapping hazards increase vulnerability to climate impacts. One example in the report is how increased extreme heat days contribute to worsening respiratory problems like asthma, which may be worse for folks exposed to more diesel exhaust and/or poor indoor air quality.

Another factor to consider when thinking about how different communities are able to adapt is employment. The report points out that “economic sectors like agriculture and tourism, which in many places predominantly employ people of color and low-income people, will be hard-hit by climate change.”

While it is true that the main climate change-related threats we face in Washington will affect everyone in the state in some way (wildfires, flooding, extreme heat, draught, ocean acidification, etc. to name just a few upstream impacts), different communities have different abilities to adapt to these threats. The disproportionate impacts to communities of color have are just beginning to be discussed, but are well documented.

Knowing how low-income communities and communities of color suffer a disproportionate burden of the negative effects of climate change due to existing inequities, what can be done to address this “climate gap”?

Supporting the adaptive capacity of the communities bearing a disproportionate burden from the negative effects of climate change might be best achieved by supporting their social and economic opportunities. This could include tying existing efforts to build community resilience, such as emergency preparedness, to equity in a way that empowers communities to address their own social and economic priorities. It could also include intentionally creating the space for frontline communities to have more decision-making power in the development of local and state climate solutions. It could also include prioritizing communities suffering from existing inequities when climate resilience resources are used.