What drew you to working on climate justice, and how did you start getting involved?

I grew up in Mexico City and became aware of environmental issues through different public awareness campaigns. For example, there was a campaign around water conservation that encouraged people not to waste water. There’s a lot of air pollution in Mexico City, they have programs for cars to not drive on certain days because the air quality was so bad.

In school, I learned about the greenhouse gas effect. My older sister is vegetarian and she’d tell me that cows are destroying the atmosphere, she’d tell that us when we were sitting down to eat. So I had that awareness for a long time. I’ve lived in a lot of different places, in each place I’ve become aware of the local environment.

I visited Japan a few years ago, and I saw an exhibition in Osaka about climate change that showed the increase in temperature around the planet, and all these different disasters that have happened because of climate change; it was very powerful. At the same time, the US under the Bush Administration, pulled out of the Kyoto protocol and were denying that climate change was happening, or that it was a problem. So it was a time when even though there really was this alarming trend, the political establishment was suppressing that.

I went to grad school in Vancouver, Canada and there’s much more awareness of Indigenous issues there than in most of the US. One of the huge political issues in British Columbia was the Northern Gateway pipeline that would traverse in the traditional territories of 80 first nation groups. The first nations stopped it using their constitutional rights. People started to make a lot of connections between climate change from burning fossil fuels to how Indigenous communities are being impacted by having fossil fuel extraction in their own backyard; how the animals and plants are dying, and water is being contaminated; people are getting sick; and the threat of fossil fuel projects to the water and land where people have lived for thousands of years.

That was very powerful for me — seeing that movement that was being led by Indigenous people. That they were not being tokenized by some environmental group, but they were actually out in front saying that this work needs to be about us, our lives and our connection to the land which is sacred to us. That was very powerful for me, and I think that experience was what really got me to feel strongly about doing this work.

What are the barriers that people of color communities face in really engaging in these issues?

I think there are a lot of barriers. There’s a long history of racism in the mainstream environmental organizations. For example, the Sierra Club used to advocate for restrictive immigration policies, because they said there were too many people coming in and that was contributing to carbon pollution, which is ridiculous. That’s an extreme example, but historically those types of organizations have been very exclusive. I think mainstream organizations don’t really have a lot of people of color and are only now starting to make a concerted effort to be inclusive.

With the environment, a lot of times, decisions are made without including people of color. The US has a history of genocide against Indigenous people, and slavery, and mass incarceration and disenfranchisement of Black people, and segregation and all these systems that are really violent. So it’s not really an accident that people don’t have access to power when it comes to various political issues, including environmental issues. That’s where a lot of the barriers come from the biggest systemic issues.

Lastly, because of all these different systems, people of color don’t have access to funding. A lot of work can happen at grassroots level but it’s hard to do it at a bigger scale.

What are some solutions that you think will have the biggest impact?

In terms of solutions, recognizing the knowledge that people have about the places where they live, and raising awareness and cultivating leaders in local communities. Reinforcing the ideas that these are issues that impact people of color, talking about ways in which they impact us, and making leadership by people of color and Indigenous people more prominent. I think Indigenous people have to be represented and included. And in terms of solutions, there are so many things that need to happen in terms of specific changes like moving away from fossil fuels, avoiding contamination of water, air.

How much of a sense of urgency do you think we need to act with?

I think that climate action is extremely urgent. It’s been urgent for decades and now we’re at a point where we (humanity) have been avoiding the types of changes that we need to make to survive and avoid horrible consequences for life on the planet. So I think we need to build really large movements. But we also need to be able to build diverse and inclusive movements and also recognize the concerns that people have.

Naomi Klein did a really good job describing how the climate crisis is deeply intertwined with the economic crisis and that it’s something you can’t ignore. You have to address both at the same time. It makes sense that climate change is very serious and we’re seeing that more and more, but at the same time people are also very concerned about not having a place to live and not being able to make ends meet, We need to ensure that people have good paying jobs. I believe in things like basic income. Your ability to survive shouldn’t depend on your productive capacity in a capitalistic system. So addressing those types of things, and working on a lot of different things at the same time like carbon pricing, building green infrastructure that will give people jobs, and just creating a shift in people’s thinking. I think it’s already happening.

In the past year or so, there’s been a big change. Events like the drought in California have really transformed how people think about climate. Naomi Klein also talked about how, during the Bush administration, there was a big drop in the number of people that believed that climate change was real. More people believed in climate change before 2000 than in 2010, and that’s because there’s been this concerted effort by the fossil fuel industry to misinform people. Thankfully, that’s starting to go in the other direction again. So I think it’s important to do everything we can. Direct action, civil disobedience, constitutional challenges are all important.

That’s another reason why Indigenous rights are so important, not to say that other people should use that, but Indigenous rights and treaty rights have been used as a way to stop fossil fuel development and transportation. Right now Canada for example, has this huge deposit of tar sands and they’re not able to extract and transport it because people have been so successful at blocking all the transportation routes like the East-West pipeline, the Enbridge, Northern Gateway, the Burnaby Kinder-Morgan pipeline, Keystone XL. In Washington, stopping the coal and oil terminals is important.

Felipe Rodriguez-Flores is the Director of Civic Engagement and 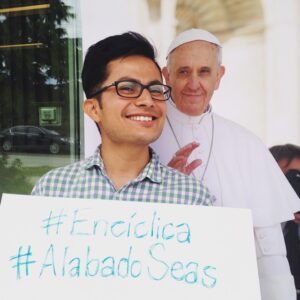 Advocacy at Latino Community Fund of Washington State, and one of the community group coordinators with the Racial Equity Team, a network of activists, organizers and lobbyists in Washington dedicated to advancing racial equity at the state level. He has contributed to LCF’s statewide policy and community organizing work with coalitions such as the Alliance for Jobs and Clean Energy and Front and Centered. Felipe was a union organizer serving public employees in Santa Barbara, California, with the International Brotherhood of Teamsters and the Service Employees International Union. In Santa Barbara County, he also became a student leader at the UC at Santa Barbara, and was heavily involved with PUEBLO Action Fund, an organization dedicated to social, environmental, and economic justice for immigrants and working families.

PrevPreviousWhy I-732 is a False Promise: Climate Justice Requires Putting Money Where Your Mouth Is
NextOn Target: Climate Action Must Deliver for Communities at the IntersectionsNext