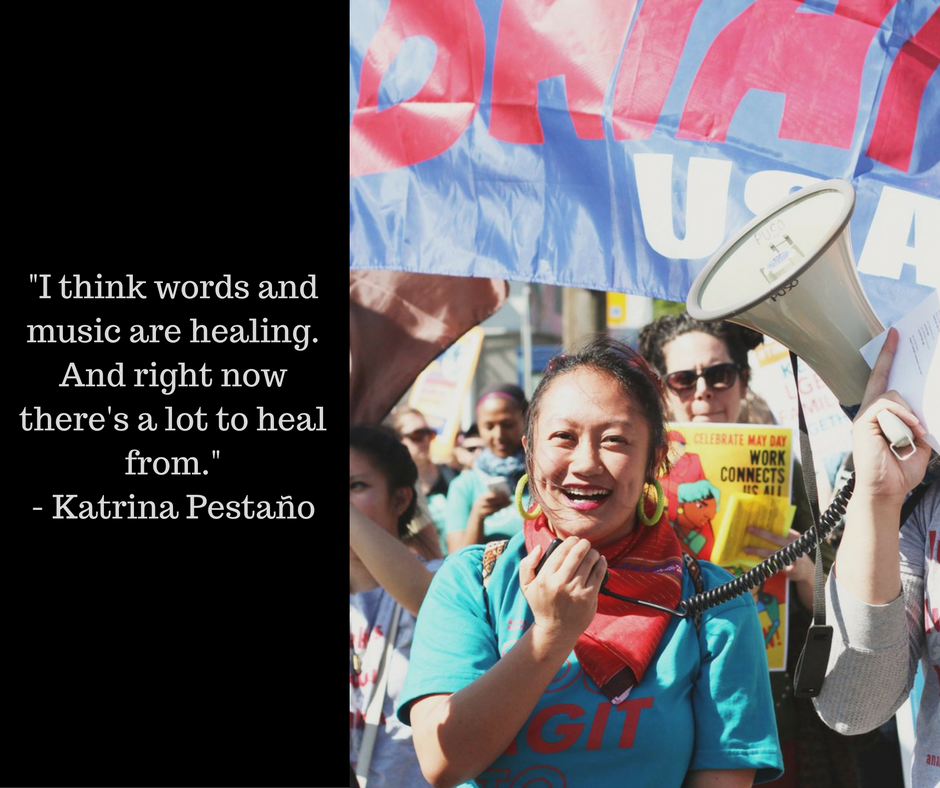 I work with an organization called Bayan or Bagong Alyansang Makabayan, which is an alliance of grassroots organizations fighting for land and sovereignty in the Philippines. For us in the overseas chapters, we connect the issues in the Philippines to what our people in the diaspora are facing. We have been doing work locally here in the PNW around immigrant and workers rights gender justice and issues impacting youth and students.

We’ve been doing climate justice work for several years after a series of typhoons hit the Philippines since 2009 or 2010 and has continued to devastate different regions.

What the difference between environmental justice work done by indigenous people and the mainstream movement?

A lot of it is around language and framing. It’s hard for me to relate to environmentalism here because it’s a lot of science and lingo that feels alienating, especially if it’s not something you’re used to hearing about. It’s also very doom and gloom, which is hard to relate to and not particularly inspiring.

I really connected to how an indigenous person in Mindanao shared his perspective. He said that when he was younger the idea of bottled water was unfathomable —  just the fact that we could package and sell water, which is an inalienable human right. He said he couldn’t imagine  a world where they can sell us anything. “They take it from us and then sell it back.” I could really connect to that. He was fighting for his way of life. People in the mainstream movement don’t talk about it like that.

What do you think are solutions? Where do you want to put your energy into fighting this crisis?

In all my political work, I believe in diversity of tactics, I think it all plays a role in creating change — as long as people are united on the change that we wanna see. That’s not necessarily where we’re at right now, but it’s important to understand that there’s a part for everyone to play. A lot of my perspective comes from the National Democratic Movement in the Philippines. They use every possible tactic you can think of  — mobilizing on the streets, taking direct action, they run people in office, they push different policies.

For myself, I’ve been thinking about how to build long-term structures that can support movement building. We need to think about how we support each other and how we provide things that our communities needs so they can participate in political work, because we’re not going to be able to mobilize people en masse if we’re not providing them with food, shelter, education and all the things they have to think about in this capitalistic economic system. I’m putting my efforts into strategies on how to do that.

How has your family been impacted by this?

I grew up in a place where we had typhoons all the time, and it was pretty normal. But I remember in Mindanao where I was born but I moved away from, it was always really hot and was never hit by typhoons. So when typhoon Pablo hit in 2012, it really struck me because they couldn’t be prepared for it, they had never really dealt with anything like that before – it was very unusual.

My family is impacted a lot by flooding in Manila, which has terrible infrastructure and is impacted by worse and worse flooding. It’s now normal that you have to move all your things to the roof twice a year and to swim around for a few days until the water subsides. My brother is there and that’s what it is like for him. When we think about it here it’s a disaster, but it’s normal over there and many places around the world.

I have nightmares of the Philippines and many of the islands no longer being in existence. And it’s a very real thing for that part of the earth. A lot of other islands in the pacific are facing a lot of similar consequences with climate change and this extremeness of it. So I feel like people of color are definitely the most impacted. Highlighting voices from these communities more globally is super important and I’ve seen how powerful that can be.

How you use your music and your art to make change? Does it make a change?

Music, art and cultural work are really powerful tools. It’s been so interesting that there have been these pop culture phenomenons like Beyonce’s album or Jesse Williams, where artists that have such a huge impact and reach are now speaking in pretty revolutionary terms. I think that’s the result of work of so many cultural workers and organizers in shifting the culture to where even celebrities think they have to put their art on the line and take risks. That is the power of cultural work. It’s the tides that are signaling the shift. I feel fortunate to have been able to articulate some of the struggles of people in my communities and my own, and to really connect that in music and to connect with people. For the most part, I see myself as an agitator and my music has been primarily that.

More and more recently I’ve been thinking of what it means to be a healer. I would love to be a healer where I can make herbs and tinctures but I also think words and music are healing. And right now there’s a lot to heal from. Being connected with our emotional selves, being vulnerable and being tender is important. Especially for women of color — we’ve been taught a lot of very contradictory things, to just suck it up and to just do the work anyway to be really respected. In the activist communities too we have to not show emotions to be a leader, in the same way that many women in power like Hillary probably feels. It’s intense but it’s true that the boxes we use to lift up women and women of color are still boxes that we can’t break out of in terms of how we act and conduct ourselves in the world. With my music too I’ve been trying to be that —  you don’t always having to be fierce and brave and you can also be scared and emotional and I think it’s super important.

As a queer person, how do you think about patriarchy and relate it to the climate crisis?

I think patriarchy and this way of thinking of domination and relentlessly taking is what we’re fighting against. It’s in all of the systems and world powers, but it’s also in our daily lives and interactions. For me, it’s the hardest to dismantle it in our daily lives and it’s the most insidious thing. People say that they understand it but they understand it more in the level of the system and not as much in our daily lives. I also do anti-violence work at API Chaya, so it’s a huge part of my life — examining the ways in which patriarchy and rape-culture are embedded in everything. It’s definitely embedded in the ways in which we take from the earth,  in imperialism — going to different lands and feeling entitled to take anything. Robbing and destroying sacred lands and benefitting from that in the whole system.

As a queer person who is non-binary but femme presenting, it’s hard to feel fully safe in a lot of spaces. It’s been a struggle — I’ve continuously confronted a lot of men and their patriarchy, but women also perpetual similar tendencies as men in queer relationships and it’s harder to call out because it’s a different manifestation of patriarchy. We have to do that work of being accountable to ourselves, the people we love, our communities and to the movement. It’s important because we can’t hold other people accountable if we don’t do that ourselves. So that’s where it starts. Even in progressive spaces there’s a lot of gaslighting and unacknowledged microaggressions and we have to tackle that.

What gives you hope?

So many things. I always think about this when I watch the sunset  — something is ending. But the last gasp of sun and sky is so gorgeous. And that’s how I feel about life right now. Things are ending. A lot of things are coming to head. People are realizing more and more how much we’re being controlled and policed in our communities.

Also, I’ve worked with youth a lot in the last several years and that’s an aspect of life where I always feel hopeful, regardless of what’s going on in my life. I want to give a shout out to fyre- Filipino Youth Reunite to Elevate. Every time I spend time with them it renews my sense of community.

Also being outside, seeing what the world has to offer and being by the water, watching the birds and the sky and the colors is so magical and uplifting. If people were just to do that enough they’d get why we have to fight so hard for all of these things.