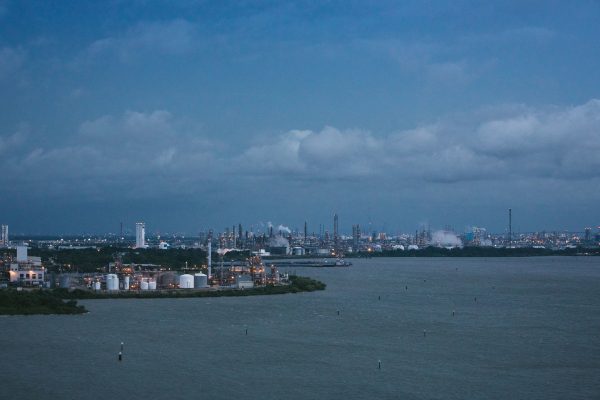 by Jessica Ramirez and Deric Gruen, Front and Centered

Last Thursday morning, the evening Hurricane Harvey was to make landfall in Jessica’s hometown of Corpus Christi, Texas she received a text message from her younger sister telling her that her parents had no plans to leave town. This was no surprise to Jessica. Even as the storm was gaining strength in the warm waters of the Gulf of Mexico, she knew her parents were not buying into the sensationalized media. As a contractor and business owner, her father couldn’t afford the lost income for his employees and himself.

Climate change has made the predictions of weather patterns, well, rather unpredictable. In Corpus, the threat of debilitating and severe thunderstorms is common and it’s even more common that they dissipate into the hot and humid Texas air. So Jessica wasn’t surprised that the threat of a “potentially strong” hurricane was not moving her family to seek safety.

But now it’s because of that unpredictability that there are hurricanes which gain catastrophic strength in just a matter of hours and no one person can say where they are going. People most vulnerable to the impacts of these climate amplified disasters are those unable to evacuate without risking lost wages and/or the cost of leaving their home for somewhere else.  The images of communities of color impacted by Hurricane Harvey and the monsoons in South Asia are the new normal.  In the midst of this tragedy, there are encouraging signs that environmental justice implications are not being forgotten.

Deric was in Houston in October 2016 as part of an environmental justice forum on state implementation of the Clean Power Plan. The local host of the conference was T.E.J.A.S, Texas Environmental Justice Advocacy Services, now a member of the Climate Justice Alliance.  During the forum, Juan Parras, T.E.J.A.S. director took conference participants on a toxic tour, pointing out refineries stretching as far as the eye can see, heavy metal recycling and waste, and oil trains, all surrounding small, mostly poor, many majority Latino neighborhoods.

While the power plant regulations to reduce climate pollution are likely toast under the new administration, the toxic landscape that surrounds Houston, including many Black and Latino, neighborhoods is now taking center stage.  In the wake of Harvey, the press is reporting strange smells, huge releases of toxic pollution, and chemical explosions. This is nothing new in T.E.J.A.S. communities, but as a result of attention to the disaster environmental justice concerns are finally making headlines, such as:

Environmental justice advocates are pointing at corporate and government actions like locating affordable housing in floodplains, failing to build infrastructure in communities of color, and ignoring calls for better air monitoring and pollution reduction in their neighborhoods. It should not take a disaster like Harvey to draw attention to what environmental justice advocates at T.E.J.A.S., Dr. Robert Bullard and many others have been pointing to for generations: environmental burdens like fossil fuel industries, torrential rain, and floods often disproportionately impact communities of color. But now that people are paying attention, we can amplify the needs of these communities and direct donations to community based organizations like T.E.J.A.S. to ensure an equitable distribution of recovery funds.

On a recent trip home to Corpus Christi, Jessica found herself mesmerized by the twinkling lights on the refineries that dance across the bay. When she was younger she remembered thinking how pretty they looked, glittering like holiday lights, and only now in her recent visits back home to South Texas does she understand what those lights off the fossil fuel refineries represent. Those lights are a contribution to the new normal for her hometown and much of the gulf coast of Texas. Eighty-degree averages around the winter holidays, 50 mph winds whipping off the waters, brown grass, and brown trees, rare thunderstorms that when they do occur are so strong they take out fences, electricity, and generate rain waters that flood towards the door of her childhood home more than once a year. But until the next weather event and as of today, Jessica and her family will continue to count their blessings and consider themselves lucky that her family is safe and their home is still in tact.