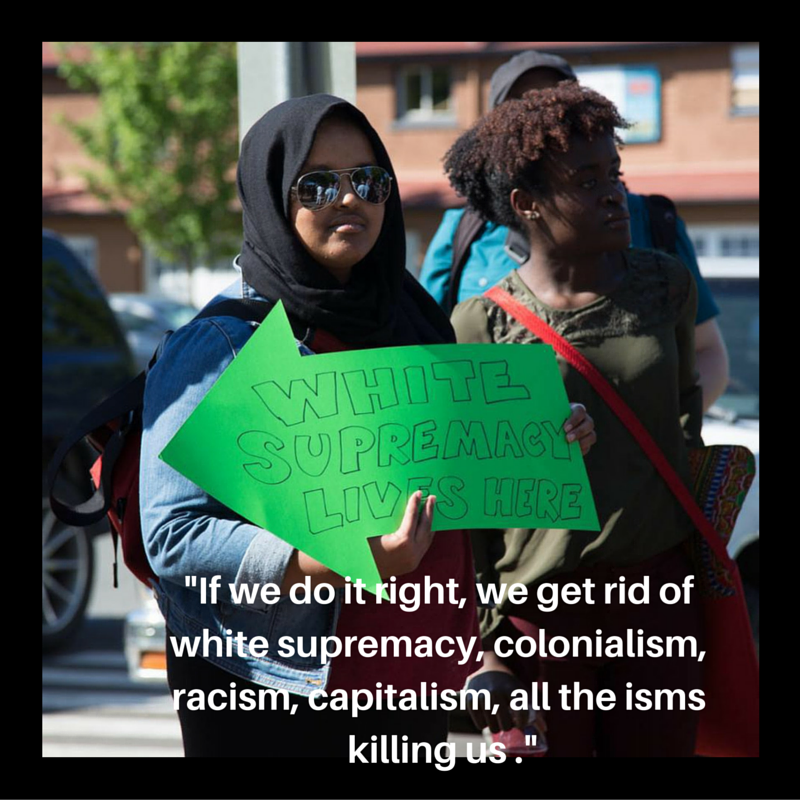 How did you get drawn to working on climate justice?

In early 2015, I was looking for a job and a good friend of mine told me about the climate justice committee that Sage and Got Green were putting together and asked me if  I was interested. I thought to myself, not really, but I said yes, because, why not, it would be really interesting thing to learn something new.

In February 2015, we had our first climate committee meeting and we were talking about how climate change was a threat multiplier and other things that assumed that everybody around the table was already bought into this climate crisis. That was not where I was at. And so I raised my hand and said, “I don’t really understand why we need to do climate work, because with the way things are, black and brown people are not going to be on the planet long. We’re dying of things like police brutality, and poverty and hunger and we’re sitting here talking about climate, how does that make sense?”

And then Sarra Tekola explained to me why climate was the thing that was going to kill us, no matter who you were, but even more particularly that it was killing people of color first. People that have done next to nothing but are being impacted the most. An alarming rate: nationally, 78% of african american people live near coal-fired power plants, and other polluting industries. That was when I realized that climate was important, that was the journey for me.

I learned that South Seattle where I live, has 38% less trees than North Seattle, and the discrepancies in the politics that play on the impact of climate change. The argument could be made that every single one of us did something to the planet: I drive, that’s doing something to the planet. But people of color and the global south have done nothing to deserve the greater impact they’re facing.

It’s really important to talk about and to understand the climate justice movement to be the end all. If we do it right, we get rid of white supremacy, colonialism, racism, capitalism, all the other isms that are killing us on a daily basis, it could be solved through this one avenue. That’s why I do this work and why I will probably do this work in different avenues for the rest of my life. It becomes personal for any climate activist of color because they know this is going to kill many people they love.

Now that we know how urgent this crisis is, what do you think we need to do? What solutions should we put our energy into?

I think it’s really important when talking of solutions to get a really good read on the problems. I can’t wake up one day and say I’m going to stop driving and that’s my solution to climate change, it’s bigger than that. If every single person stopped driving it would do something, but it would not be enough to do the impacts that we need. In big environmental organizations, everybody feels blameless, like they haven’t done anything to do it, but are here to solve it. It’s going to take people who are invested in solving it because of the impacts: this is happening because my country could be under water. In Somalia, we’re on the coast and that water has had trash dumped into it and people are still fishing and eating from it. That’s a really intense impact.

Solutions need to talk about what happened, how did we get to this, what role did our governments and businesses play in the industries that we worked for, the things that we love. How are we, then, participating in what is happening? We need to know the real story. And then it’s important to be like, “We’re going to stop mining, and stop transporting coal” and it’s going to take real life promises and stands against coal and the extractive industry and it’s got to be taken by everybody. It can’t be people of color saying stop mining and our big green partners just being like, “Don’t stop, slow it down”. We don’t have time for that. Everybody’s got to be on board for the same thing.

And it’s got to be a racially just solution. It’s got to be good for women, gender non-conforming and trans folks and indigenous folks because if it’s not, then it’s not a solution.

What barriers does your community face from engaging in the climate justice movement on a larger scale?

We’re changing it slowly, but the climate movement has been and is still overwhelmingly white dudes. Up until early 2015, I didn’t really think about climate change as something understandable that could be talked about and worked on, it was so huge. Everyone said polar bears are dying and the ice caps are melting, and I thought, what am I supposed to do, hold the ice together? There was no way for me to be involved.

And as black folx there’s so many things in the world that are happening to us, it’s very difficult to then connect that bigger thing that’s in Alaska, for example, to the things are happening to me in the inner city. There’s shootings in neighborhoods, there’s over-policing, poverty and likely, a coal plant next door.

When we think about the relationships to the polluting industries, it’s really complex because people’s families have lived next to one, or have worked in one. How do we separate the place that is giving you space to live, and things to do, to connecting that to the thing that is also trying to kill you. And it’s been policy to put black people in places where they are — next to freeways and next to pollution. I know that black people’s involvement in this climate war is integral because the people impacted the most should be the ones that come up with the solutions.

Specifically as a Somali person, my community is not as politicized as I would like, and they are not really thinking  about these things. We’re not in a space to participate in politics and activism because of prior traumas. I’m trying to politicize my community in any way that I can and I dunno if they’re going to talk about climate change. So that’s my struggle.

What are you currently working on as Climate Justice organizer for Got Green?

I am putting together a Climate and Gentrification Institute. People don’t think of those two things as linked at all or related, I want to make sure that housing is a climate issue. People need to have a healthy place to live, and people are being gentrified from the urban core to rural places and having to drive in and all the complications that go with that and especially for people of color who are low income and can’t afford to do that.

This institute is going to focus on climate and gentrification, communications and campaign development in preparation for our anti-displacement campaign that we’re going to be launching soon.

Hodan Hassan is the Climate Justice Organizer for Got Green where she develops community leadership, represents Got Green in local alliances, and is working on creating a campaign narrative on climate, displacement and gentrification. Hodan began her journey as a Washington Bus Fellow where she learned all the skills of a political organizer. She then moved on to work as a Campus Organizer with the Bus where she worked with students from six universities on campus civic engagement. In her lifetime she wants to have a real impact on the world and advance the fight toward collective liberation, and Black liberation in particular. Outside of Got Green, she organizes with a Black-led organizing group called the Seattle Black Book Club. Hodan graduated from the University of Washington in 2014 with a BA in Political Science.