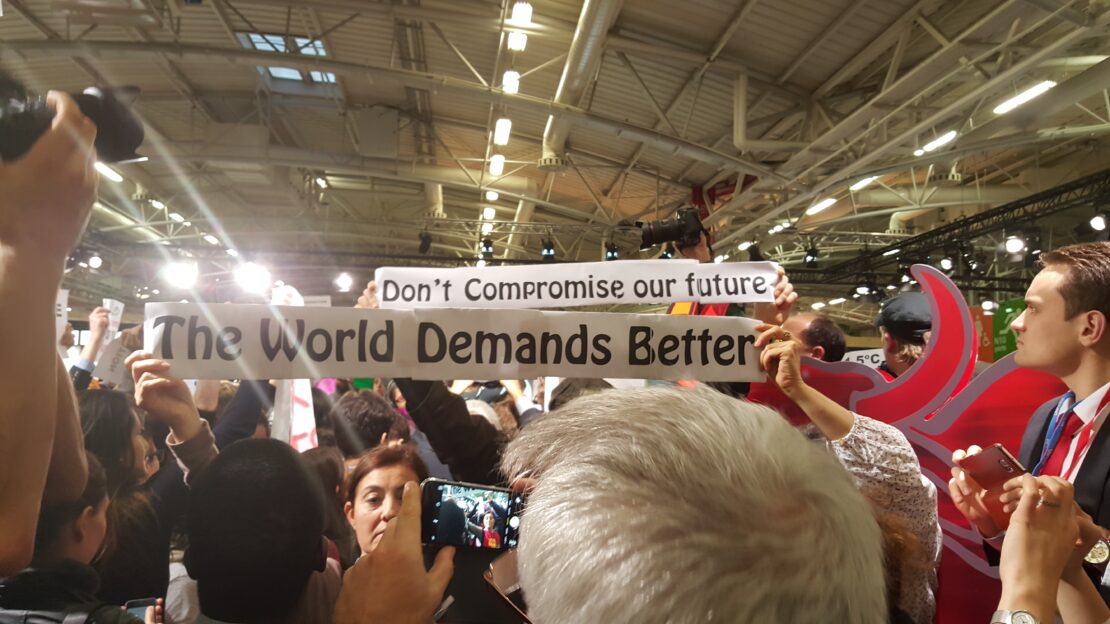 This is the text of a speech given by Jeff Johnson, President of the Washington State Labor Council at The Evergreen State College on January 13th, 2016.

If the Planet Were a Bank, We Would Have Already Saved It.”

I heard a young French trade union say this at a forum in Paris last month where Jeremy Corbyn and Naomi Klein were speaking. Never have words been so true. And never has the expression “too big to fail” had more relevance than when referencing our planet.

My name is Jeff Johnson and I am the President of the Washington State Labor Council, AFL-CIO. We represent about 450,000 union members in the state of Washington.

Over the past two years I have been working in the labor community to develop a clear, unified position on jobs and climate. During this time, I have served on the Governor’s Carbon Emission Reduction Taskforce, passed a comprehensive Climate and Jobs Resolution at the 2015 WSLC Convention (Resolution 28 – www.wslc.org), joined the Governance Board of the Alliance for Jobs and Clean Energy, keynoted a town hall meeting at the steelworker’s union hall in Spokane Valley, and was part of the labor delegation at the Paris Climate talks.

I have to say that the Alliance is the largest, deepest and broadest coalition that I have been in the thirty years I have done political work in WA state. The Alliance comprises environmental, labor, communities of color, business, faith based, and community organizations. The Alliance believes that the two great threats to broadly shared prosperity are income inequality and climate disruption. It also believes that these issues can and must be tackled together.

The Alliance is rooted in shared values that place equity at the core of climate solutions. Specifically:

Last month I was in Paris as part of the labor delegation to the Climate talks. What I learned in Paris reinforced the values that the Alliance is predicated on.

At these temperatures Island nations disappear completely and low lying countries and cities e.g., think Bangladesh and Miami, become uninhabitable. The point being that to actually accomplish the job of reducing carbon and GHG enough to keep temperatures from creating tens of millions of food and water refugees we need a full complement of carbon reduction policies: a descending cap, carbon pricing, and investments to mitigate and adapt to climate change and to accelerate the growth of the new clean energy economy.

On this last point the Paris agreement speaks to $100 billion dollars a year in funding from northern countries to southern countries for climate mitigation and adaptation. This is a good start but the United Nations predicts that the actual cost is closer to $1 trillion needed per year. One place to look for the money is the 40% of the world’s wealth held in banking tax havens.

The third thing we worked on in Paris was trying to get: “Just Transition” and human rights language into the operational portion of the Paris text. We did not succeed. We were able to get the language into the non-binding preamble of the text. This was a huge disappointment but also the first time the language appeared in the text at all.

I think the thing I took away from the talks that was most impressive was the knowledge that my counterparts in other countries recognize that climate change poses the largest economic transformation in the world since the industrial revolution. And we can either be at the table determining what this looks like, or we can be on the menu. An organizer in Oakland, California said, “Transition is inevitable, justice is not.”

Question: Is there a middle ground between Initiative 732 and what the Alliance has been proposing?

Answer: While I want to acknowledge the incredible work of those in the room who collected the signatures for I-732 and for parts of the initiative itself, since the initiative has been filed the answer is no. And here is why: