On the Fronlines of Climate Change: Part I 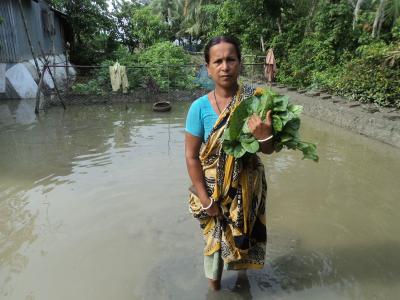 Climate change can often feel like a complicated matter of science whose real threats loomed somewhere in the distance. I’m not the only one to think of global climate change as too big a dilemma to tackle when faced with other problems that can feel more immediate. However, viewing climate change from the perspective of communities living its impacts exposes how urgent action is needed, and even what action must be taken.

Across the world, climate change is pushing people from their homes and home countries. It’s not just about rising sea levels forcing people from their communities and livelihoods.  Climate change also threatens food and economic security; serious weather events like natural disasters and droughts lead to political instability and aggravate civil conflicts. Efforts to escape such circumstances bring migrants to countries like the United States, only to be once again disproportionately exposed to the impacts of climate change.

Join us for a three-part blog series: we discuss climate change as a driver of migration; the unique ways climate change impacts immigrants and refugees in receiving countries; and productive ways for Washington State to use this perspective to guide our action on climate change.

Part I: Climate Change as a Driver of Migration

People move.  Migration is a part of the human experience. In 2013, the UN estimated that some 232 million people were living outside their country of origin. One increasingly significant factor in that movement is climate change, which is a powerful contributor to political, economic, and social instability, and therefore migration.

The world’s oceans are showing signs of acidification (harmful levels of carbonic acid created when oceans absorb too much atmospheric carbon), and this is killing coral, which plays the vital role of creating livable habitats. This in turn threatens fish populations, upon which human communities depend for food and sources of income around the world. The Seattle Times showed the impacts of this phenomenon at the bottom of the ocean near Papua New Guinea and in fish processing plants right here in the Northwest. Ocean acidification is quickly shutting down once-lucrative industries, gradually gutting local economies and forcing fishermen and others to search for new sources of both income and sustenance.

Global warming is also predicted to shrink islands in the South Pacific, leading some to seek refugee status as they watch their homes disappear. Some estimate that climate change is also responsible for 80% of the recent increase to natural disasters, whose frequency and intensity have skyrocketed throughout the world. People are moving inland and in search of more stable climates and economies.

Rising global temperatures have contributed heavily to the extension of droughts in places already prone to them, while flooding others through excess rainfall. Climate change is still just one of many factors that led to the political instability in Syria, but lack of access to water and food insecurity, researchers at the Center for Climate and Security argue, cannot be overlooked as key contributors.

Still, not everyone escaping rising sea levels, decimation of industries and food sources, droughts or other natural disasters, will immediately migrate across borders. Many become ‘internally displaced’, Take for example cattle farmers in East Africa who find themselves in conflict with other groups as pressure on land and water increases with population shifts. In a grim cycle, this movement puts further pressure on natural resources and has even led to armed conflict as groups compete over access to food and livelihoods.

Stay tuned as our discussion unfolds and we bring certain aspects of the immigrant experience with climate change closer to home in Part II of our series.