OneAmerica says I-732 the wrong direction for Washington State 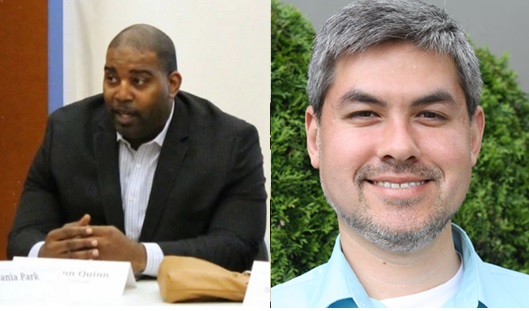 This post was written by OneAmerica Executive Director Rich Stolz and OneAmerica Board Member De’Sean Quinn, Steering Committee Members of Front and Centered, and was originally posted on the OneAmerica blog.

The dual threat of climate change and the pollution that causes it requires the broadest possible coalition to address its impacts and to decrease our society’s reliance on fossil fuels. Few feel these threats more acutely than low-income communities, communities of color and immigrant and refugee communities. Studies show that these communities tend to live in areas most affected by climate change impacts and pollution, showing increased rates of asthma and other health problems, despite contributing the least to the problem. Our communities must be part of crafting the solution.

The Principles for Climate Justice, developed by Front & Centered (formerly Communities of Color for Climate Justice) and endorsed by OneAmerica, require that communities that have experienced the most adverse impacts from climate change and the pollution that causes it have a seat at the table when crafting solutions. It also means that any policy must incorporate community accountability, transparency and enforcement that is public, accessible and culturally appropriate. It also calls for a portion of the revenue generated from a price on carbon to be invested directly into front-line communities and workers.

A new ballot initiative that recently qualified for the November 2016 election, I-732, seeks to reduce carbon emissions by taxing fossil fuels. It would also lower the sales tax by 1 percent and largely eliminates business taxes on manufacturing in Washington State in a bid to be revenue neutral. Proponents of I-732 claim to have a formula that would garner support from climate activists on the one hand and anti-tax conservatives on the other.

OneAmerica opposes I-732 for the following reasons:

I-732 is inconsistent with the Principles for Climate Justice. The proposal was formed without meaningful input from communities of color or low-income communities. Rather than engaging with these communities, I-732 organizers patronized and ignored concerns raised by these stakeholders. While the final policy includes a provision to fund tax rebates to some low-wage workers and residents, the policy as a whole stands in opposition to the stated desires of leaders in Washington’s environmental justice community.

I-732 is not revenue neutral and dangerously pits climate activism against funding for education and basic human services. Rather than being revenue neutral, I-732 is revenue negative. Recent analyses show that the proposal would cost the state over $914 million over four years in lost revenue. If I-732 were to pass, it would put at risk the State’s ability to fund basic human services, to meet a court-ordered mandate to fund basic education, and to fulfill other functions of government.

Carbon WA, the effort behind I-732, has attempted to call into question estimates provided by Washington state analysts on the degree to which I-732 would harm the state budget. However, such analyses cannot be taken on their face, given that the Carbon WA analysis is not independent. Carbon WA fails to explain that the carbon tax in British Columbia, on which the I-732 proposal is modeled, has also been revenue negative.

Furthermore, while proponents argue that cutting the sales tax by 1 percent will make the State’s tax system less regressive, this is no comfort to the families, schools and communities that a billion dollar shortfall would harm. One of the primary reasons revenue-neutral carbon taxes have garnered little public support in the past is the belief by voters that eventually the carbon tax has to increase to be effective, or there will need to be other new taxes. In the case of I-732, these suspicions are founded.

On the matter of tax policy, Washington State needs to decrease its reliance on the sales tax (and other regressive taxes) and identify more progressive sources of revenue over time. But a carbon tax alone is not on its face a progressive source of revenue, because those who can least afford to pay more for their energy will continue to be the most burdened.  The shortfall I-732 creates in Washington’s budget will damage Washington’s ability to help those who’ll most need support to offset I-732’s impact.

Furthermore, there is no accountability expected of corporations that would benefit from tax cuts in the manufacturing sector.  A cut to the sales tax will mean little to front-line workers who may see their jobs leave Washington for other states our countries.

And while an important policy, the Working Families Tax Rebate is an imperfect tool to offset the likely higher cost of energy in Washington State for lower-income consumers, particularly for fixed-income seniors and other low income families the rebate cannot serve.

I-732 risks side-lining policies that may be more effective over time. Through extensive research on climate policy, OneAmerica believes that Washington needs a policy approach consistent with climate justice principles and that includes the following:

•    An enforceable cap on carbon emissions
•    A price on carbon that will promote less reliance on fossil fuels, and
•    Investments in clean energy alternatives and programs that will mitigate the impacts of pollution and climate change.

A just transition to a clean energy economy must also take into consideration the impact of such a transition on workers in the fossil fuel economy and on the communities that bear the brunt of fossil fuel pollution.

In this context, a carbon tax is just one part of a broader solution. And without these other legs of this three-legged stool, the success of a carbon tax will be dependent on it reaching a level at which the cost of fossil fuels will be unbearable to consumers over time. Meanwhile, the most effective aspects of other successful carbon pricing programs are their investments in low-carbon alternatives.

I-732 might have been attractive a decade ago, when the environmental community was viewed largely as a white, middle class reform movement. That’s not true today.

There’s a Better Path Ahead

Today’s environmental movement is led by low-income communities and communities of color, front-line workers and labor unions, environmental activists and organizations, entrepreneurs, public health professionals, consumers, and so much more. Rather than turning the clock back with I-732, we need to build on the growing momentum toward just and equitable climate solutions.

We need a responsible climate change solution that meets the needs of all communities and ensures that we all have the tools we need to slow and adapt to climate change. In the process we must include areas of our state that already suffer disproportionately from the public health impacts of unfettered pollution and changing weather patterns, with the recognition that existing socioeconomic disparities will exacerbate the effects of each of these threats.