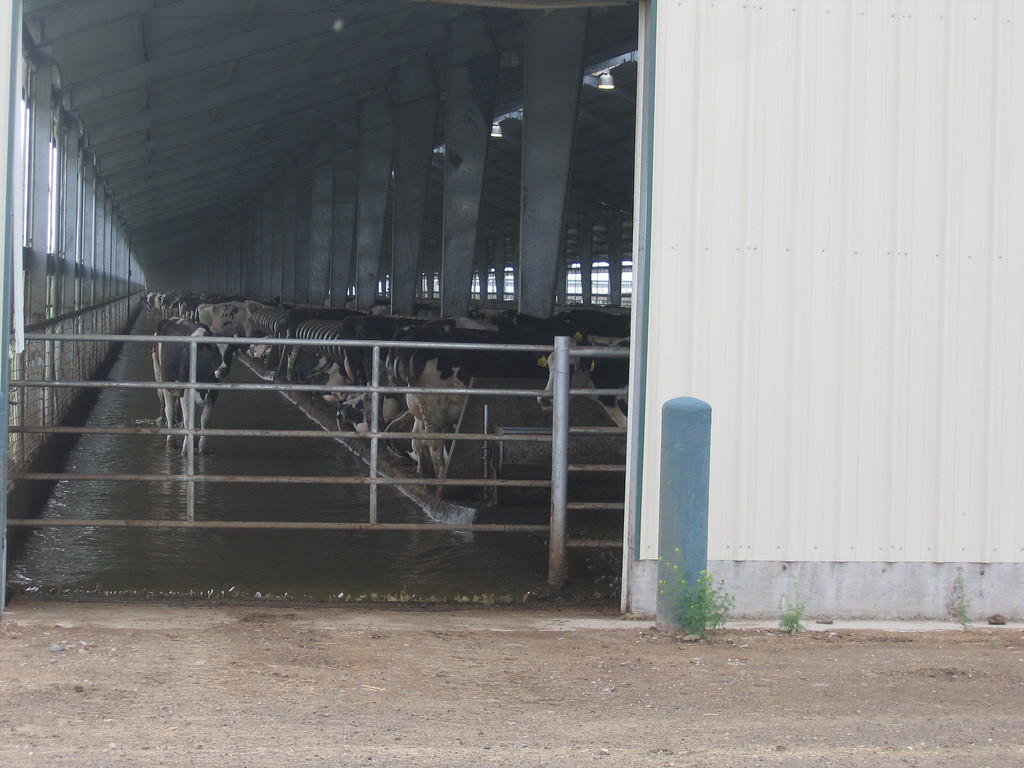 “I can’t drink the water at my house.”

Yakima-based organizer Mary Lopez heard this concern over and over last summer as she conducted a community survey.

In the Yakima area, over 70% of the people surveyed identified air and water pollution as their top concern – with very good reason. OneAmerica investigated and found that Washington state is failing to protect some residents’ drinking water from agricultural contaminants.

More than a third of the homes in the Lower Yakima Valley get their drinking water from private wells fed by groundwater. At least twenty percent of those wells are so contaminated with nitrates that residents cannot drink from them, and the largest source of that pollution is manure from dairy cows.

Large dairy farms, or Concentrated Animal Feeding Operations (CAFOs) produce millions of pounds of manure each month. The manure is stored in lagoons and applied to crop fields for fertilizer, but if farmers aren’t careful, nitrogen seeps into the area’s characteristically well-drained soil where it’s converted to soluble nitrate and enters the Valley’s shallow groundwater.

High levels of nitrates in drinking water can have terrible health impacts. Infants fed formula mixed with nitrate contaminated water can develop horrifying blue baby syndrome. And pregnant women who drink nitrate-contaminated water are four times as likely as other women to have fetuses with neural tube defects like anencephaly, in which the fetus never develops parts of the brain and skull. The Lower Yakima Valley hosts an anencephaly cluster, in which this birth defect occurs at a rate over four times the national average.

Worse yet, the Washington communities being poisoned with nitrates already face a multitude of socioeconomic and public health burdens that make this threat especially potent.

For example, neighborhoods in Sunnyside, a town in the Lower Yakima Valley, have extremely high risk of drinking water contamination due to proximity to point-source polluters. Up to 40% of Sunnyside residents are also linguistically isolated, meaning they live in households where none of the adults speak English well.

In many of those neighborhoods, over 70% of residents live in poverty and are uninsured at a rate two-and-a-half times the national benchmark. The area’s fertility rateis also 50% above the state average and teenage pregnancy is twice as common, which renders a contaminant most threatening to infants and pregnant women especially alarming. The town is in the 86th percentile nationwide for renter-occupied households, and those renting homes served by private wells are dependent on landlords to test water quality, which gives them no guarantee of safe drinking water.

Who’s looking out for Sunnyside residents?

The State’s Department of Ecology, which is obligated to protect water quality, has historically regulated dairy farms by issuing water discharge permits, or licenses to operate CAFOs. The permit should provide farms with strict guidelines on how to line their manure lagoons to prevent leakage; where, when, and how much manure to apply to croplands, and; how to test surface water, soil, and groundwater to ensure nitrogen isn’t polluting drinking water.

Charged with updating their groundwater discharge permit for Concentrated Animal Feeding Operations, the Department of Ecology issued a draft earlier in the summer that fails in each of those objectives.

Despite recommendations from its own scientists, the permit does not require groundwater testing or technologies proven to prevent leakage, so no one will know if nitrates are entering well water until it’s already contaminated. Additionally, the permit’s inconsequential penalties for noncompliance can only be imposed if Ecology can identify a willful violation, which is too high a burden of proof.

In developing the permit, the Dept. of Ecology conducted an extensive stakeholder engagement process with the politically powerful dairy industry throughout the spring, this resulting permit seems to protect their interests.

Meanwhile, the largely low-income Latino communities the Valley, who depend on a strong CAFO permit for clean drinking water, were kept in the dark until very recently.Ecology didn’t translate a single word about this permit into Spanish until I personally requested interpretation services for a public hearing in July — despite thefederal requirements under Title VI of the 1964 Civil Rights Act.

Communities impacted by CAFO pollution deserve their own in-language stakeholder engagement process. Ecology was also able to analyze the monetary impacts of permit compliance to businesses. The residents of the Lower Yakima Valley deserve no less. Ecology must analyze the environmental justice impacts of a permit that will jeopardize drinking water for communities across the state.

It was difficult to read this draft permit with the words of OneAmerica community members echoing in my head: “No puedo tomar el agua en la casa.” I kept wondering, why is this community’s water worth compromising?

The State Department of Ecology is still accepting comments on the permit. Let them know that every Washington community deserves clean drinking water.

PrevPreviousOn Target: Climate Action Must Deliver for Communities at the Intersections
NextChallenging Armchair Equity: Toward A Movement Lead By Frontline CommunitiesNext