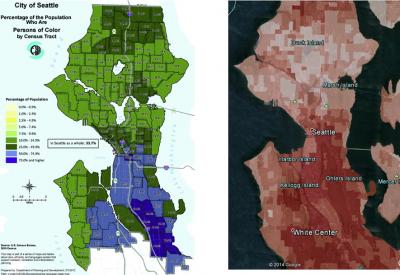 This post, written by OneAmerica Policy Associate Ellicott Dandy, is part two of a three-part series on climate change. You can read the first part here.

What happens when migrants leave places impacted by climate change? Where do they go? Immigrants in new countries often live in so-called “sacrifice zones,” where the environment is much worse than in other areas. In the US, ZIP code is a reliable indicator of public health. Life-spans are shorter where people with lower incomes and people of color (including immigrants and refugees) live.

Immigrants tend to live in areas with high rates of air pollution from the same emitters that contribute to climate change. In the Puget Sound region, traffic from I-5 spews enough toxic exhaust and irritants to send its neighbors to the hospital for asthma at alarming rates. King County Public Health reports that those patients are largely people with lower-incomes and people of color.

Hurricane Katrina exposed the structural racism in disaster relief protocols. There were an estimated 116,000-131,000 immigrants and refugees in New Orleans and those without legal status faced threats of deportation if they requested disaster relief. Even more recently, New York and New Jersey’s Latino communities felt the devastation of Superstorm Sandy acutely. Controversy over forgotten victims once again drew attention to FEMA’s policies that exclude undocumented immigrants from full assistance.

Meanwhile, drought rages in California. It threatens the nation’s food sources and puts agricultural workers at the frontlines. Rates of heat-related illness among migrant farm-workers are on the rise, sometimes resulting in death. The drought could also lead to unemployment for California’s Latino farm-workers. Many have already left the area in search of work where there is more water, including the northwest.

The drought-related increase in food prices hurts everyone, but especially those who spend a higher proportion of their income on food. The CDC has found rates of malnutrition as high as 80% in immigrant and refugee communities across the country. Any hike in food prices will hit immigrant and refugee communities harder than the nation as a whole.

Some immigrants have tried to supplement the food they buy by fishing. But ocean acidification and over-fishing have severely reduced fish populations here in the Puget Sound. For many immigrants and refugees, this is a serious problem because, as Van Dinh Kuno of Refugee and Immigrant Services Northwest puts it, “They don’t go to fish for fun; they go to fish for food.”

You might also remember from our previous post that immigrants and refugees living along the banks of the Duwamish River can expect flooding in the not-so-distant future.

As with nearly any issue – from education to racial profiling – the immigrant experiences tell us more about climate change than we might otherwise see. We, at OneAmerica, also see immense value in these perspectives as critical tools for shaping equitable, productive policy solutions. Our final installment in this blog series will explore how the experiences of Washington State’s immigrant and refugee communities can help us design climate policies.