When We Lead: Spectra Project Off the Ground in South King County 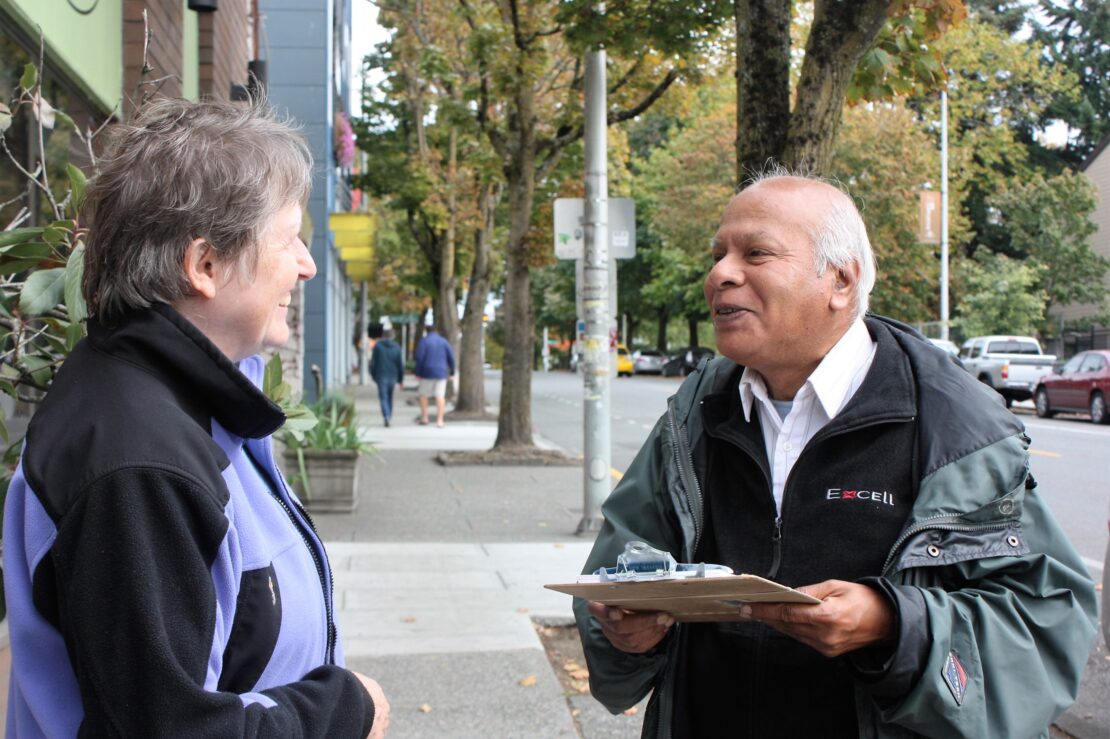 In the weeks leading up to last year’s general election, a team of canvassers was dispatched into neighborhoods across SeaTac and Tukwila, as part of grand experiment on voter behavior.

Operation Spectra, as it was called, set out to discover the most efficient and cost-effective way to increase voter participation in areas of low-voter turnout, where the concentrations of people of color exceeded 50 percent.

Canvassers from Washington Community Action Network visited more than 2,000 households across 25 precincts. Nine additional precincts were also included as a baseline for the experiment.

The goal was to test five strategies for moving non-participating registered voters — those voters who had not voted in any of the last eight major elections, primary and general.

In an off-year election when turnout across the state hit a record low, the results exceeded researchers expectations, proving that personalized outreach is more effective at motivating voters than literature dropped in the mail or left at the front door – common strategies employed by most political candidates or ballot campaigns.

The long-term significance of the results for cities like SeaTac and Tukwila cannot be overstated. As these communities have grown increasingly diverse over the last two decades, there has been no correlative increase in voter turnout.

Data show that in those two cities, more than 82 percent of registered voters, who consistently voted over the last three years, describe themselves as white. That means candidates vying for office in these communities, or those trying to run an issue-oriented campaign, are likely to spend their time, money and effort on these white voters whom they feel confident will turn in their ballots.

As a result, voters in communities with high concentrations of people of color are dismissed as unmovable and therefore not worth the cost or effort.

Operation Spectra was designed and implemented by a partnership that included Washington CAN, the Washington Environmental Council, Melissa R. Michelson, a professor of political science at Menlo College and Teresa Purcell of Purcell Public Affairs, a campaign and civic engagement expert.

It is rooted in the belief that voting empowers people, especially those who historically have had none.

Washington CAN sees an opportunity to arrest a worrisome voting trend. Its 40,000 statewide members vote at rates 12 percent higher than the average Washingtonian, due in part to the direct contact its canvassers make with them throughout the year. And the organization wanted to find a way to replicate that kind of voting behavior in these communities.

“We’ve never had it connected to any research. Now we are connecting the dots,” Mauricio Ayon, political director of the organization. “Voting is one way to grant power right now to people who don’t have it. It’s about the long-term. We are looking at 2018, 2020 and beyond. Spectra is the first step.”

Ayon believes that if left unchecked, the number of people who actually vote in these increasingly diverse communities will gradually grow fewer.

Spectra participants were also asked their opinions on a series of economic justice and environmental questions, including:

Do you support policies that would require corporations pay for their pollution and invest the money in community priorities?

It’s not surprise that an overwhelming 93% of respondents support the concept of accountability, requiring corporations to pay for their pollution. Low-income communities and communities of color in Washington suffer disproportionately from the toxic air pollution that spews from cars and trucks and from port and industrial activity.

As the state experienced consecutive years of record-breaking wildfires and drought conditions, the public is becoming increasingly aware of the links between heat-trapping carbon pollution and a warming planet.