When We Lead: Voting with Language Access in AAPI Communities 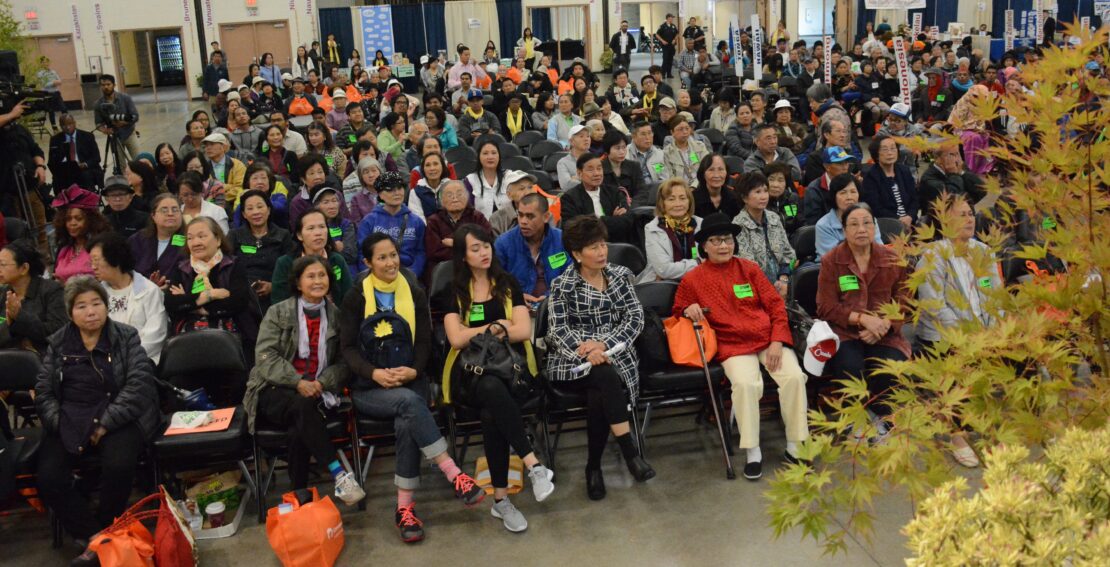 As the Washington State Gubernatorial candidates, Bill Bryant and Jay Inslee, stepped onto the stage for one of the largest civic engagement summits of Asian Americans and Pacific Islanders (AAPI) voters in the nation, a crowd of 2,000 people reduced their conversations to whispers.   They turned their attention to the candidates and waited in anticipation for the candidates to address the crowd.

The audience traveled south from Everett and north from Olympia to arrive in the Tacoma Exhibition Hall.  Folks from Spokane and Yakima got into cars and drove west to the event starting at 4am so that they could arrive for the 10am event starting time.  Even more people traveled from all over King County and Pierce County, to arrive for this moment.  The 2016 Asian American and Pacific Islander Summit: Celebrating Unity & Civic Engagement was a show of force and the political power of AAPIs in Washington.

Language accessibility is critical to making informed votes.  On top of this the previously mentioned statistic assumes that that AAPI community are engaged by political campaigns to begin with.”

While candidate forums are increasingly common as election deadlines round the corner, forums that are culturally and linguistically accessible for the AAPI community are very rare.  The event on September 15th, was simultaneously interpreted into 27 AAPI languages ranging from larger languages groups like Korean and Samoan to smaller language groups such as Karen and Tongan.  It should be noted that AAPIs are three times more likely to cite language barriers as a reason why they don’t vote, compared to Latino voters.  Language accessibility is critical to making informed votes.  On top of this the previously mentioned statistic assumes that that AAPI community are engaged by political campaigns to begin with.  Yet, in 2015, we know that 74% of registered Pacific Islander voters and 80% of registered Asian American voters were never contacted about the General Election.  It would be an understatement to say that this forum was not only unique but a display of truly inclusive voter education and engagement.

The Summit not only featured the Gubernatorial forum but also included a variety of speakers and even a special address from Congresswoman Judy Chu the Chair of the Congressional Asian Pacific American Caucus who spoke about the political power of AAPIs. There was also an inspiring Hmong youth from Spokane who dedicated her speech to the importance of youth involvement in civic engagement.

During the forum, each candidate addressed issues of importance to the AAPI community in Washington.  This included raising the minimum wage, funding basic education, support for health and human services, addressing revenue in the State budget, and climate change.

The topic of climate change was the first question asked to the candidates.  AAPIs are one of the venerable communities being impacted by rising seas that are claiming cultural homelands and impacting the agricultural-based economies for AAPI farmers.  The AAPI community is also living in climate hot spots where air quality is one of the many climate change concerns that people face every day.  This was a critical question that opened up the forum.

Each candidate appeared to be supportive of reducing climate impacts on communities of color and specifically AAPIs.  Jay Inslee mentioned that he had the political background to create solutions that reduce the impact of climate change on the AAPI community.  Concretely, Inslee mentioned championing the Clean Air Rule, which he believes “All of our children, and all of our grandchildren as of today have a new protection against carbon pollution which is endangering their health and [which will] reduce the threat of climate change”.  Bill Bryant was also supportive of reducing the impacts of climate change and carbon pollution on AAPI communities.  However, he was concerned about Clean Air Rule and suggested that he wanted “to move forward on tangible measures that help reduce our carbon emissions” but did not want “to go forward with proposals that could end up costing us middle class jobs” without improving the environment.  Following each candidate’s response, interpreters had 90 seconds summarize and relay the candidate’s stances to audience members.

Culturally inclusive and linguistically accessible events like this Summit create a more vibrant democracy.  By reducing the barriers to voter education and engagement, AAPI community members are able to more fully engage in electoral politics.  This means that they are more likely to feel more comfortable to make informed choices about who they want to represent their values and who they want as a protector of their family’s future.

But as the fastest growing racial minority in the United States, APIC believes that it is critical for AAPIs to be more deeply engaged in our civic engagement conversation.”

The Asian Pacific Islander Coalition (APIC), strives to bring civic engagement to the community, especially those that are limited English proficient and low-propensity voters.  These outreach and voter education opportunities are rare in political campaigns.  But as the fastest growing racial minority in the United States, APIC believes that it is critical for AAPIs to be more deeply engaged in our civic engagement conversation.  It is time that we stop waiting for civic engagement that comes to us.  Instead we realize that our community deeply cares about civic engagement and that civic engagement should be accessible to all people. APIC puts AAPIs at the center of our work and provides opportunities for our voices to be strong and to be heard.