On Earth Day, A New Proposal Provides a Groundbreaking Model for Climate Justice 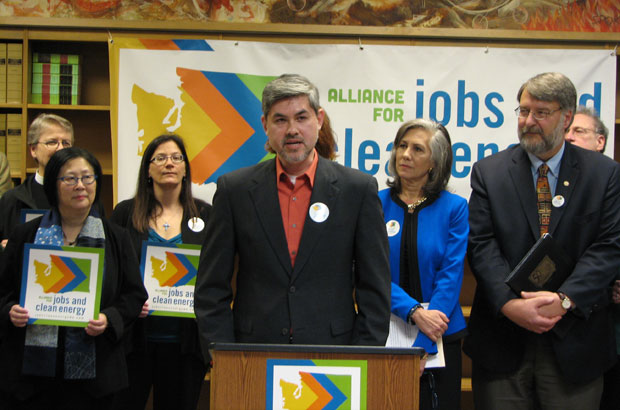 Today, the Alliance for Jobs & Clean Energy released a new model for climate policy. The Alliance proposal is a groundbreaking framework for action on climate, built through consensus across environmental, racial equity, labor, faith, and business groups.

The Front & Centered coalition, including OneAmerica, played a leading role in designing a unique way to cut pollution that puts communities at the frontlines first.  We helped form the Alliance, alongside environmentalists, labor, health, family advocates, businesses, faith communities and more, to make sure equity was core to its purpose, and our leaders have served on both the Steering Committee and Governance Board.  Collectively Front and Centered held listening sessions across the state that centered Asian Pacific Islanders, African Americans, and Latinos and people with lower incomes. That input, alongside the committees, surveys, and assemblies held by Front and Centered organizations with their members forms the basis of our approach.

Together, we can make Washington State the first place to put a limit and a price on pollution, while simultaneously creating new jobs, protecting our environment, and bringing economic and environmental benefits to communities at the fenceline of pollution and the frontlines of climate change. Here’s how it works:

•    The best science will dictate our cap, or limit on pollution
•    The largest polluters in the state will pay a fee in order to reduce that pollution, starting at $15 per ton of CO2 and increasing over time
•    The proceeds from that fee will be invested in Washington’s environment, its communities, and its low-carbon economy
•    A diverse committee of Washingtonians will oversee the program, ensuring that the program benefits all of Washington’s communities

We are committed to more resources for projects that reduce pollution in communities across the state – especially with more than a third directed of investments targeted to those most impacted by pollution and economic challenges – and to make cleaner alternatives accessible to everyone. We’re also thrilled to see funding for the Working Families Tax Credit, which will help reduce the unfairness in our tax system, and ease the transition for up to 450,000 Washingtonians with low and moderate incomes.

The diverse coalition that has come together under the Alliance banner united by the shared conviction that action on climate is an opportunity to create a cleaner, greener, more equitable economy. Under our plan, workers in fossil fuel industries will receive transition benefits. Industries with high emissions who must compete with others from out-of-state will be eligible for assistance to ensure they keep jobs in Washington State, and communities on the frontlines of pollution and climate change will directly participate in assessing and improving the policy.

Finally, more funding will be spent on projects and programs to protect our forests and our water, and to continue to grow our clean energy sector. All of these investments will preserve the beautiful environment we all enjoy, protect our communities from drought, wildfire, and fossil fuel pollution, and help us adapt to our changing climate—all while creating family-wage jobs for Washingtonians.

“This year saw great strides in ensuring that those who suffer the most from climate change and the pollution that causes it have a seat at the table when solutions are devised.

Last October, leaders from a broad array of groups formed a coalition and led a nationwide day of action to demand climate justice at the Paris Climate Conference. This advocacy resulted in a historic agreement, the Paris Climate Protocols, set to be signed by 160 countries today in New York City. More must still be done to ensure an equitable and global clean energy future.

Earlier today, Seattle Mayor Edward B. Murray announced recommendations from the City’s Environment & Equity Initiative. OneAmerica Votes Board President Sudha Nandagopal managed this effort, and OneAmerica Director of Education and Integration Policy served on the steering committee of this important process. With this new initiative, Seattle is trail-blazing a new national model that places communities of color and environmental justice communities at the center of the response to climate change.

Also today, the Alliance for Jobs and Clean Energy, an unprecedented broad-based coalition of groups in Washington State, announced a new policy proposal for how Washington State can create a national standard for limiting carbon emissions and reinvesting revenue from carbon pricing into critical programs and projects that will catalyze and ensure a just and equitable transition to a clear energy economy.

This Earth Day, we reflect on a growing movement for climate justice. Securing an inclusive future in which everyone, including immigrants and refugees, has the opportunity to thrive is inextricably tied to addressing the threat of climate change, while centering the fight on the demand for racial equity. The environmental movement – by embracing communities that have been excluded for so long – is beginning to realize its true potential.”

We believe this is the best pathway to Washington State’s low carbon future, but we need your help to fine-tune it. Because climate change effects everyone, we need every voice to shape solutions. Are you interested in learning more? Subscribe to Front and Centered to stay up to date on statewide climate justice.

Rich Stolz is the Executive Director of OneAmerica, a member of the Governing Board of the Alliance for Jobs and Clean Energy, and a Steering Committee member of Front and Centered.