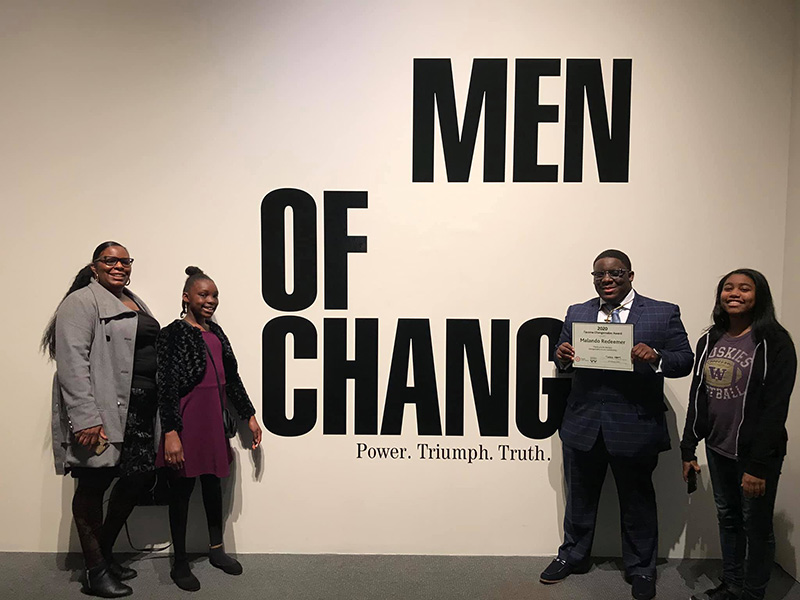 Front and Centered is inspired by Malando Redeemer, a remarkable 24-year-old emerging young leader who grew up in a family and community filled with role models and mentors who demonstrated the epitome of love, peace, and justice in action.

Love, peace, and justice are what he was raised to do. Whether it was his late godfather Judge Frank Burgess who was the second African American U.S. District Court Judge in the Pacific Northwest, Mayor Harold Moss who was Tacoma’s first African American mayor, Pastor Christopher of Shiloh Baptist Church (and Front and Centered member), Dr. Maxine Mimms founder of the Tacoma campus of the Evergreen State College, Malando was surrounded and amazed by some of the most inspiring Black leaders that shaped his current dynamic path. “They taught me to serve and to love,” he says.

Indeed, that is exactly what Malando has done, jumping right into leadership as Youth President for the Pierce County/Tacoma NAACP Youth Council, and then moving on to obtain his pastoral certification, attending the Institute for Community Leadership, and returning to Tacoma to serve in multiple leadership roles in addition to founding a new group, United Advocates for Justice. 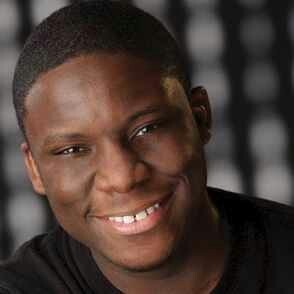 Today, Malando is serving his community to the fullest: as a youth pastor with Shiloh Baptist Church, a union organizer with SEIU 1199NW, and the 3rd Vice President for the NAACP Tacoma Branch overseeing the youth work. When asked what he sees as the biggest issues to tackle in his community, Malando weaves a powerful analysis of how affordable housing, police brutality, inequities in access to resources and vaccinations to address COVID19, altogether create a context of compounding challenges for the Black community in Tacoma.

“We need to be able to preserve the opportunities to live where we can work,” Malando explains. “Service workers at hospitals are essential workers who are increasingly finding it hard to afford housing at the hospitals due to gentrification. We had to make a fuss about why there were no popup sites for vaccinations in Black neighborhoods…This is the time to mobilize resources for our health, and for a longtime now, our lives. In this regard, police brutality is a serious problem and as I watched people protest for their – our – lives get gassed in comparison to the violent, armed protesters of January 6th, it highlights the question of who is valued more, and who is policed more.”

“Environmental, racial, and economic justice go hand in hand. As I lead, I want to do so to show love and peace.” 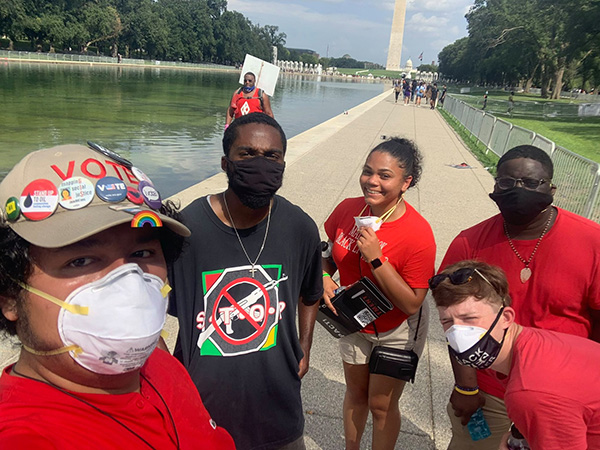 Malando is a dedicated advocate for the betterment of his community, whether through his church, union, or civic engagement in environmental advocacy. Having grown up in Tacoma, which he aims to become mayor of one day and deems “the greatest city on earth,” Malando is on track to evangelize about how exactly environmental, racial, and economic justice issues intersect not only for the community at large, but especially for the Black community in Tacoma.

Until he met Front and Centered’s Sameer Ranade, Malando had not given much thought to the notion of environmental justice. But after learning more about environmental health issues and solar energy for Shiloh Baptist Church, the issues of injustice and relationship between environmental, racial, and economic justice came together in a new framework of reference. “As someone with asthma and allergies, I grew up in the neighborhoods of Hilltop and Spanaway… I now understand the impact on our neighborhood, of growing up with proximity to pollution,” Malando points out. “When I look at environmental justice, it is so connected. Arsenic is in our soil. Life expectancy is lower, and BIPOC neighborhoods are within closer distance of the pollution from the factories.”

“As someone with asthma and allergies, I grew up in the neighborhoods of Hilltop and Spanaway… I now understand the impact on our neighborhood, of growing up with proximity to pollution,” Malando points out. “When I look at environmental justice, it is so connected. Arsenic is in our soil. Life expectancy is lower, and BIPOC neighborhoods are within closer distance of the pollution from the factories.”

As an Assistant Pastor at Shiloh Baptist church, Malando is an invaluable mentor to many, and leads efforts to empower people. His role as a union organizer and participation in climate change and environmental justice events as a volunteer make him the embodiment of the intersection of equity and environmental health. Malando knows the intersection occurs when doing advocacy work to uproot systemic racism.

His leadership reflects the justice and compassion we must instill in society to achieve environmental justice, break the school to prison pipeline, and create good jobs for everyone. Front and Centered is inspired by Malando because the change he makes is based in Pierce County but reverberates throughout the entire state.

This is the first in a series of blog posts highlighting Black Leaders on the Frontlines in our state who are working at the intersection of environmental, racial, and economic justice.

PrevPreviousOur View from the Frontlines
NextVictory Lap: Let’s build the clean and just transportation we needNext