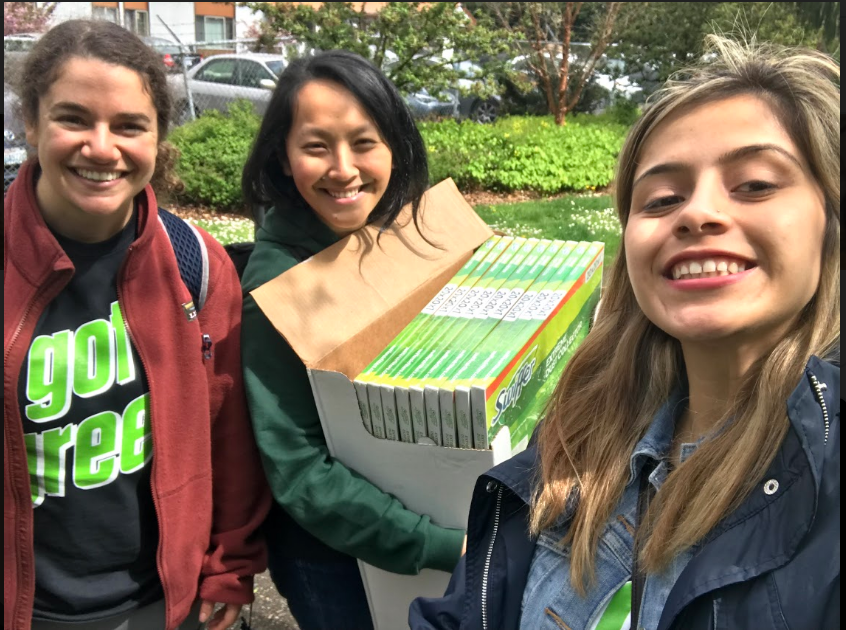 Last summer’s wildfire smoke rose to a level where it was dangerous to leave our homes.

Thankfully, the focus of the first Green-A-Thon I volunteered at with South Seattle-based climate justice organization Got Green, was sharing with communities about building resilience in the face of these health hazards, as we prepare for another likely smoky summer ahead. On Saturday, I attended the annual door-knocking and fundraising event that Got Green has organized since 2012, joining the “Young Money” young leaders door-knocking team to hand out air filters and discuss policy solutions like the possibility of Seattle’s very own Green New Deal.

One of the 70 doors we knocked on was that of Mary Martinez, who lives in Columbia City.

“Last summer, I couldn’t leave my house,” she told me in Spanish. “It was very difficult for me to breathe, but I had to leave home to go to work. The air from the fires made me get eye infections on both of my eyes. It was a difficult time for me.”

Mary raised some additional concerns: What if the fires get worse this year?

While more air filters may help her in the short-term, we spoke with her about the long-term possibility of a Green New Deal for Seattle — calling for city council members to ensure democratic and renewable energy, access to fair, green jobs, affordable housing, healthy food and public transit.

“I’m a resident from South Seattle, and politicians always say what we want them to say, but never do anything about it. It’s time actions are taken. If I’m supporting this project, it’s because I have a seven-year-old daughter, and I want her to have a healthier lifestyle. I want the city to keep their promise if they’re saying they will help.”

As we honor Mother Earth this week, we should remember that the long fight and struggle for climate justice continues among neighbors in our own backyards. And as Mary reminds us, our elected officials need to be accountable and and pass laws to ensure that everyone has the right to a healthier life.

PrevPreviousAdvancing climate justice in the House after ‘100 Percent’ Senate victory
Next2019 Legislative Review: Wins and Steps Toward Climate and Environmental JusticeNext