What counts when we count carbon pollution? Lessons from Oregon 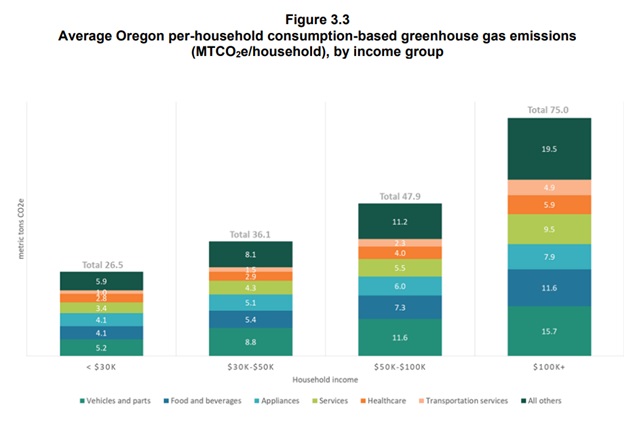 The State of Oregon has a new count of their state’s greenhouse gas (GHG) pollution and it’s not looking good.  Oregon is not on track to meet its 2020 target of reducing emissions 10 percent below 1990 levels by 2020 (nor is Washington for that matter).  But beyond the headline, there are important lessons to be learned in the new report about who is contributing, how much, and where to target solutions. 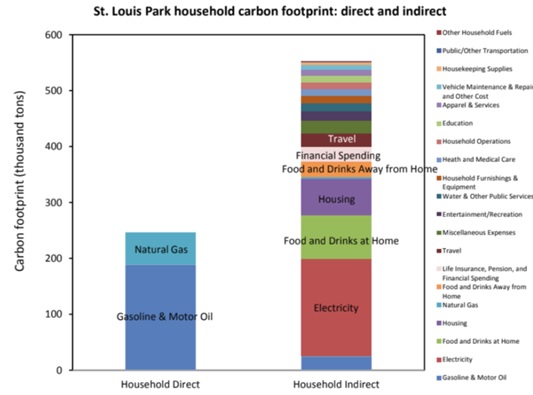 The State of Oregon looks at carbon pollution differently than every other state.  Washington State, and most states and countries, only track emissions produced within their state — referred to as sector, geographic, scope one (and two), direct, or production inventories depending on the report and approach – with the exception of electricity, of which emissions are often estimated at the point of generation (power plant) for all electricity used, regardless of where it is produced. Oregon does that, but also estimates pollution by consumption; regardless of where they are emitted, accounting for all energy, goods, and services consumed.

The “consumption” method of counting of emissions in GHG inventories is about tracking the scale and responsibility for emissions.  Oregon’s approach considers not just ‘where did the pollution happen’, but ‘who benefited because of this pollution’ and the result is striking. Oregon shows much higher pollution than “sector” emissions, and the gap between them has grown consistently: consumption-based emissions were 6 million MTCO2e higher in 1990; that gap doubled by 2005 and doubled again (to 25 million MTCO2e higher) by 2015. Oregon’s consumption-based GHG emissions in 2015 were 42 percent above 1990 levels even while “sector” based emissions showed some decline (comparison illustrated below). 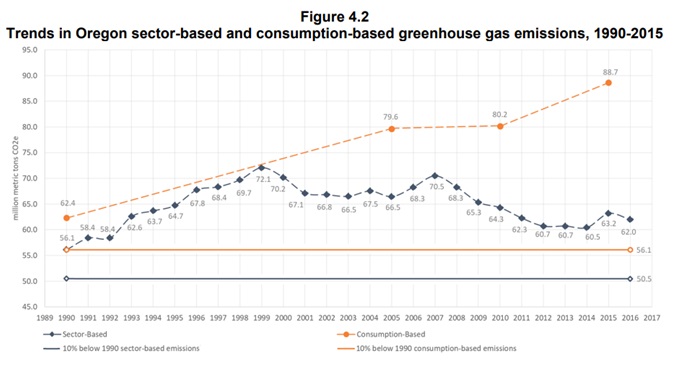 While in state emissions have gone down since 2000, Oregon’s overall contribution to global warming overall has gone up, and is climbing fast.

Why?  Likely because of the steep growth in consumption, with much of carbon consumed out of state, from places with different pollution profiles. Between the period 2005 and 2015, reductions in emissions intensities (emissions per dollar spent; down 14.3%) have been more than offset by an increase in total consumption, as measured in real (inflation-adjusted) dollars (up 30%), leading to a continued rise in overall consumption-based emissions.  While Oregon may have been getting slightly better at polluting less carbon from sectors in state, at the same time it’s been generating more of its pollution elsewhere; and overall emissions have gone up.

When you count emissions by consumption, and not just in-state production, it can reveal not only a different scale of emissions, but also a different picture of who’s benefiting from pollution.

For example, in Oregon lower-income households consume less, and their average carbon footprint is also lower (illustrated below). Higher-income households on average generate more consumption-based emissions (see figure 3.3).  Without a consumption-based count of emissions, this would be less evident. Washington’s sector-based inventory doesn’t capture the huge impact of food, goods, services, and transportation of higher income people that isn’t emitted in state (or from imported electricity) and does not ask or answer distribution questions by income, race, work, or other key societal determinants.

Income is one of the best predictors of pollution (the more income, the more pollution)

Oregon is making the effort to see a more complete picture of their state’s responsibility for carbon pollution, which can help avoid making policy with incomplete information. This can help Oregon make sure it is actually reducing carbon pollution, rather than pushing pollution around, in many cases to areas to areas already disproportionately polluted, which will not reduce global warming and climate impacts locally.

Minneapolis is anticipated to release a consumption-based inventory this year. King County’s 2012 inventory included consumption and showed emissions where nearly twice as high per person as their production or geographic based inventory. Similarly, a recent report by C40 cities aggregated many cities, including Seattle, and found that for fifteen cities mostly in Europe and North America, their consumption based GHG emissions are at least three times sector based counts, and nearly two-thirds of emissions are imported from outside the city.

Washington State has not gathered or released a consumption based GHG inventory so we don’t know who much our consumption is contributing to the problem or by whom, although these examples give us a strong clue.

It’s critical Washington also have a complete picture of our responsibility, from both a global justice perspective of reducing pollution and not just shifting it into disproportionately burdened communities’ areas elsewhere, as well as a local equity perspective, to target climate strategies based on impact and need.