Analysis: How did the 2019 legislative session fare on climate justice? 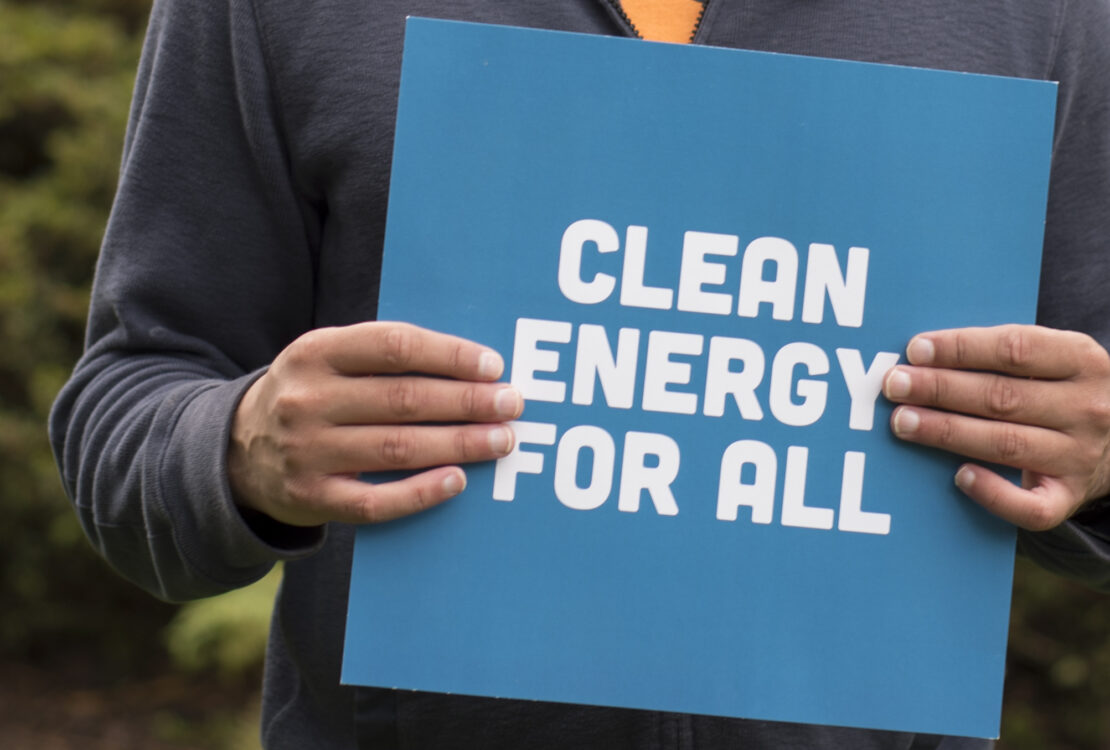 Front and Centered envisions a more just future that is not only cleaner and safer, but where our communities and the earth are healed and thriving, our people have dignified work opportunity and prosperity, and our government values, respects, and represents us.

In order to reach this vision, policies in the Washington State Legislature must address equitable governance, a prerequisite to effective action; healthy communities rooted in place, strengthening our relationship to place to prevent and reduce pollution; a regenerative economy that places equity and well-being above accumulation, and resources throughout it; and renewable resources, which includes energy conservation and solar power.

In these areas, our work is guided by climate justice principles that include the use of an equity analysis, equitable decision-making, and the achievement of equitable outcomes.

So how did Washington fare under these principles this session?

Good environmental policy starts with equitable decision-making process. The scale of change we’re able to achieve depends on whether equity is embedded in decisions. 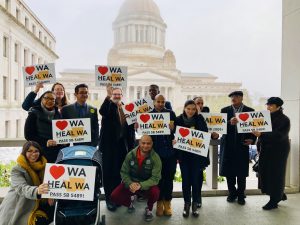 Advocates push through slushy snow to testify in support of the HEAL Act during the bill’s first hearing on Feb. 13. Photo by Samantha Bushman.

Steps made toward equitable governance:

More to work on:

**We testified in support of this bill. 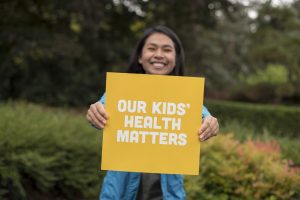 By respecting communities’ ability to thrive in place, and relationships to place, we can reduce pollution and build resilience. This was embedded in the HEAL Act through environmental health disparities mapping. Issues like land use, housing and transportation are integral to climate justice. Front and Centered anticipates an increased focus on those three in future policy work. In the meantime, we want to highlight some progress that move us forward as a state in these areas. Legislation addressing place that passed included:

How we create livelihoods, how we meet our needs, and ultimately how we manage our economy is critical to reducing pollution and achieving our vision of climate justice. Regenerative economic policy is an area we intend more attention to in future sessions. In the meantime, some wins of note: 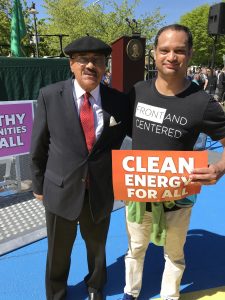 Pastor Herbert Carey of To God Be the Glory Church in Kent with Front and Centered’s Sameer Ranade. Photo courtesy of Sameer Ranade.

Equitable governance, the management of place, and our economy can ensure we use fewer resources. However, we also need to transition the resources we do use to maximize efficiency and switch to renewable sources. Some wins this session in that direction:

**We testified in support of this bill.

Front and Centered is in the process of further developing our framework for policy that advances climate and environmental justice. While this session was a step forward, it’s clear this is just the beginning and more work is needed to develop community-responsive policy, educate legislators, mobilize for action and advance equitable governance, place-based communities, regenerative economies, and renewable resources.