Challenging Armchair Equity: Toward A Movement Lead By Frontline Communities 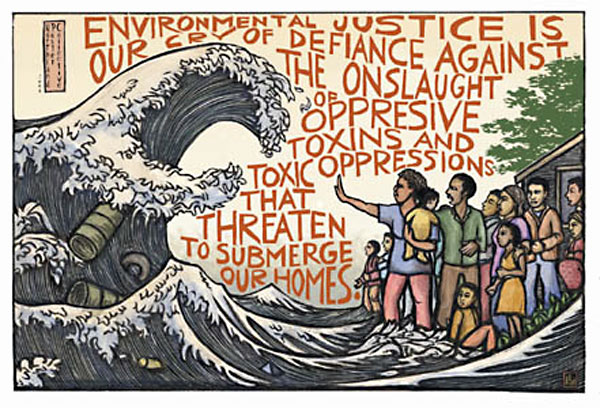 This post is part of a series: Equitable Carbon Pricing

More than 25 years ago the Principles of Environmental Justice were established at the First National People of Color Environmental Leadership Summit, in part to make it clear that justice could not be achieved without the active engagement and decision making of the people most impacted by environmental harm. We applaud those who are working to elevate communities on the frontlines, most often communities of color. On the other hand, for those who promote themselves as the voice of equity without engaging communities of color, we are compelled to speak out and challenge them at every level.

This is not just as opportunity to educate and foster dialogue, but to ensure our expertise is respected and our communities have a role in determining what’s best for us. Front and Centered formed two years ago to bring together leaders of color to engage, shape and lead Climate Justice work in Washington State. In this post, the final of a series, we will share what it will take to build an equitable and effective climate and environmental movement.

Core to Environmental Justice is that the people most impacted are the ones identifying and leading solutions.  While carbon pollution and climate change impact everyone, they impact people of color first and worst. On any progressive issue, whether it be women’s rights, marriage equality or immigration reform, we recognize that those who have the most at stake should lead. A women’s rights agenda determined by a majority of men would not be tolerated. The same expectation should be applied in deciding what’s equitable for communities of color; that includes equitable solutions to climate change.

For most of the last 25 years frontline communities have been largely ignored.  Yet in the last few years there has been an awakening in parts of the historically white, mainstream environmental movement – particularly the climate movement.  There is a realization that to succeed, people of color, both a rising share of the population and those most impacted and most likely to support action, must be part of the solution.

A women’s rights agenda determined by a majority of men would not be tolerated. The same expectation should be applied to deciding what’s equitable for communities of color

This awakening comes as people of color will soon reach one-third of Washington State’s population.  Between the year 2000 and 2010, people of color made up 73% of net population growth in Washington, including nearly all the growth in King and Yakima counties, and more around three quarters of the growth in Snohomish and Pierce Counties.  Moving forward our communities will make up 90% of growth statewide.  This has implications not only for politics, which must respond to the needs of communities of color, but also for emissions reductions approaches. Any climate solution must meet the needs of our communities or will miss a significant share of the population.

In addition to being numerous, communities of color are a cornerstone of support for environmental action. While people of color are vastly underrepresented in paid environmental staff, board and leadership positions, polls have shown that climate change and concern for the environment, are important, high profile issues for communities of color, ones in which we consistently express more urgency and willingness to act.

Indigenous communities and communities of color have been living and organizing on environmental issues for many years.  More recently, in Washington State we formed Front and Centered to make it clear that communities of color are organized and able to share their knowledge and help lead the movement for a safer climate. Our organizations are made up of the communities most impacted, people of color, people with lower incomes and indigenous people.  We have gathered at neighborhood centers, places of worship, and on front porches to identify our needs and solutions. We do this work even as our resources are small in comparison to large mainstream organizations with many staff.

Modeling Equity at Every Level

Listening, learning and integrating the expertise, interests, and positions of communities of color is the first step. Beyond that, the work to build an effective environmental movement requires that we model equity at every level.  What do we mean by that?

Historically commissions, board, campaigns and organizations that significantly shape the lives of people of color, have, at best, had one or two people of color to bring the voice of our growing and highly diverse population. Not only is that ineffective, but it disrespects the diversity within communities of color. With well over two dozen Tribes in Washington State, as sovereign nations, how could one person represent them all? Neither can one Latino represent an entire hemisphere of people who have come to the US at different times under different circumstances. For people of color to be equitably represented.  We have decision making power proportional to and representative of the impacts on our communities.

Anyone who professes to be ‘doing right’ by people suffering from racism, poverty, and pollution while telling us we are wrong is not modeling equity nor committed to environmental justice.

Modeling equity also means supporting the capacity of community of color groups to do our work and represent our interests. Currently in the environmental movement mainstream organizations have budgets, staff and resources much larger than groups grounded in communities of color, who are stretched thin with many demands and fewer resources to reach out to their base.

For example, we asked that the State’s largest climate organizations, Climate Solutions and Washington Environmental Council, not only commit to equitable input on climate policy but also that they not raise money from foundations and donors for organizing communities of color. They did this and went the extra mile, donating staff time to help garner the first grant for Front and Centered. Now, collectively, through Front and Centered, we have developed our own independent capacity to raise funds and increased our ability to actively engage our communities on climate change.

Finally, there is policy. That’s what the I-732 debate is all about, and its failure to consider interests expressed by communities of color is the reason we oppose it. While it’s the right topic – putting a price on carbon pollution – it’s the wrong approach. It won’t be effective and it doesn’t foster equity.  Equitable policy is developed with us, not by a campaign telling us what equity is. Anyone who professes to be ‘doing right’ by people suffering from racism, poverty, and pollution while telling us we are wrong is not modeling equity nor committed to environmental justice.

In this series we set the record straight on what communities of color need from climate action and called out what we see as the false promises for communities of color.  There is no shortcut for the need to engage, listen and respect frontline communities as equal partners. What’s ‘equitable’ and ‘fair’ cannot be defined from the ‘armchair’ – the comfort of existing positions of power and influence in the environmental movement.  We have seen a cycle of ‘experts’ and think tanks  try to say that they represent us.  We are writing to make it abundantly clear; we will continue to build power in our communities to speak for ourselves, making equity, environmental justice and our voices front and centered.